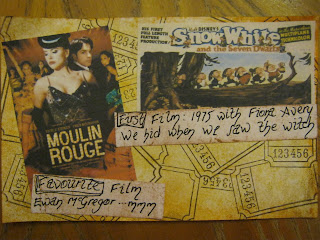 This week was "Films; What was the first film you saw at a cinema and who with, favourite film, include some film meomorabilia". Well I wasn't quite sure whether the first film I saw was Dumbo or Snow White. I have very clear memories of going to the cinema to see Dumbo and joining the queue but being sent home when we reached the front as that showing was full and then having to go back later for the next showing. I also remember going to see Snow White and ducking down behind the seats because I was scared when I saw the witch! So I Wikipedia-d both films and discovered that Dumbo was re-released in '72 and '76 and Snow White in '75 so from that I deduced that my first film was Snow White! We lived in a cul-de-sac at the time and I went with a girl who lived down the road called Fiona Avery....I won't say she was a particular friend because she was bigger than me and I remember she pinched me REALLY hard one time when I was playing with her. Still I had the last laugh because she poked her fingers through our back gate (after being told not to), and was bitten by our rather anti-social, uber protective, dog at the time!
Anyway I digress, fave film is really any of the three Baz Luhrman Red Curtain films; Strictly Ballroom, Romeo and Juliet (the one with Claire Danes and Leonardo Di Caprio) and Moulin Rouge. In the end I plumped for Moulin Rouge as I just ADORE Ewan McGregor.....swoon!!!