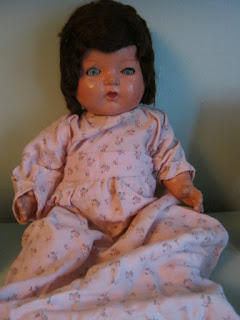 Meet Isabelle, she belonged to my Mother in Law and as my FIL is moving house shortly she has come to live with me. Now I assumed that as MIL was born in 1940 the doll was from about 1945 but having taken her into a local auction house it would appear she is from 1910. Hmmm I am rather sceptical about this myself, knowing the family history, so this afternoon I am taking her to a doll hospital for more advice. 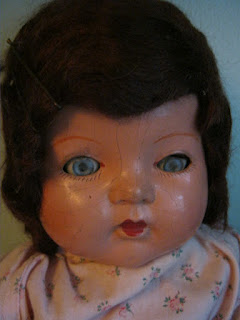 She has a rather beautiful face and I think that her hair is rather 1920's. When I do find out how old she is I shall make her some appropriate clothes as hers are not original in any way. She did come wearing a baby vest bearing the name Corah St Margaret. So I Googled it and it would appear that Corah were a company who broke away from the Wholesale Textiles Association to supply Marks and Spencers in the early 20's. By doing this they were thrown out of the Association and thereby could only trade with M&S. In order to cover up their links with M&S they traded under the name St Margarets which later became the well know St Michael brand that M&S used! How fascinating is that? I was unable to find out exactly when the name changed to St Michael but it would be in the 30's I think so the vest must pre-date that.