Ever been to Dungeness? 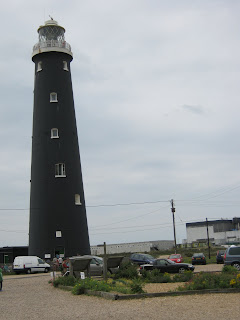 No I hadn't either! But I have just been away on Brownie Pack Holiday. We stayed at Greatsone-on-Sea (near New Romney) and one day we caught the miniature steam train to Dungeness. Now all I knew about Dungeness was that there was a nuclear power station there. But as we arrived I discovered that it is a very unusual place. There doesn't appear to be a lot there apart from wooden houses. Now I use the term loosley as some appeared to be little more than sheds! There was also this amazing old lighthouse which is no longer in use as a new one has replaced it. 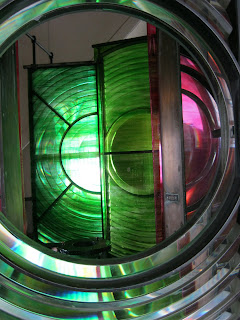 These are some of the old coloured lenses that used to go around the light. 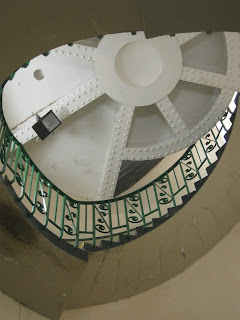 And these are some of the 169 steps to reach the top! Once at the top this is the huge lens in position. Just an amazing structure and I wish I could have taken more pics but it was tricky whilst supervising Brownies!
The weather when we went was a nothing sort of weather but the light was odd; it was a really atmospheric place with a hint of desolation and foreboding and I can really imagine Doctor Who or sci-fi films being shot there. A very suprising place and I think I would like to re-visit in more dramatic weather, with my big camera!

I'll come with you Tash! Must be a great place to photograph:)