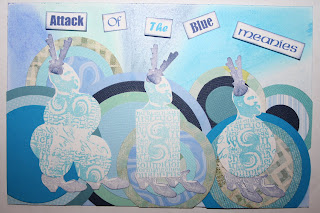 This CJ has been sitting on my desk for about 3 weeks now. I found the stamp tricky and to compound it blue is a colour I just never use! So I began to think of all the blue things I could. Several had already been used but rattling around my brain was this phrase "Blue Meanies". Now I didn't know where it came from so I looked on the internet and found that it was from the Beatles film "The Yellow Submarine" So this is my take on the Blue Meanies! 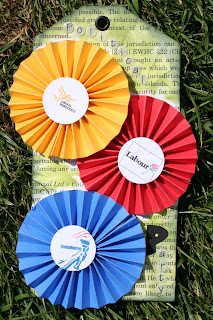 And this is my next Tag for UK Stampers...P for Party. I was rather hoping for P for Pants but Party it was! There have been some lovely additions so I thought I would go for a political slant as I saw these rather yummy accordian flowers whilst I was blog hopping and fancied a try! Well, let me tell you they are REALLY tricky to make as the middle keeps popping up and won't stay flat! I tried Pritt then PVA finally resorting to double-sided tape and a good whack and they actually only stayed flat once I taped them to the tag with about half a yard of tape each! So if anyone has a fail-safe technique for how to get these to work without the violence please leave me a note!!!

Love your CJ entry, remember the film and the 'blue meanies'. Your fist one looks like he belongs in 'Monty Python'. Great work. Your tag is super too, bet it weighs a ton with all that tape !!

that CJ entry looks as if it was tricky to do with all the cutting out..love the party tag what a good idea